Our team is very proud of the short backup and restore times NovaStor DataCenter is able to achieve. Marketing and Sales are using words like "multi-streaming" and "multiplexing" to describe the speed of backup and restore, but do you know what exactly they are trying to say?

This article highlights two of the features that are part of the reason for DataCenter’s backup and restore speed. 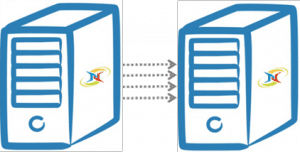 Multi-streaming (often times called multi-threading) is splitting up the data from the source into multiple streams that will be transferred at the same time. For example, if you were to back up a folder with 1TB of data a regular backup job would send the data in a single stream to the backup server. With multi-streaming the 1TB of data is split into several streams with all of the streams being transferred simultaneously. Thus, the backup is much faster. 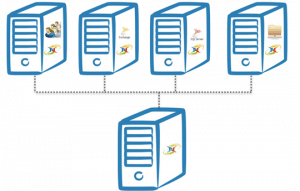 Another way of multi-streaming data is by backing up several servers at the same time to the same backup storage, for example a disk device. Without an option to multi-stream at the backup device, all servers would send their data one after the other. Allowing multiple servers to send the data at the same time utilizes the network configuration to its maximum and shortens the backup window. Also it makes your backup configuration much less complex as you do not have to schedule the jobs so they do not overlap.

Multiplexing is taking multiple data streams and streaming them to tape in order to utilize the full bandwidth of the tape drive. With a one stream backup job the tape library would idle more than it would actually write data. Most vendors for tape drives agree that the constant stop and write of a single streamed backup job is actually bad and shortens the life time of the tape drive and the tape media. With a multiplexer the tape drive is able to run constantly thus, writing the data faster to tape. The same applies for a restore. Having multiple connections transferring the data back from the backup server enables the user to have their systems up and running again with less downtime.

Due to budget restrictions, IT administrators are not able to replace existing hardware very often. But the amount of user data they need to protect increases exponentially. Sometimes a weekend is not enough to write all the data to disk and/ or to tape for a full backup. Multistreaming and multiplexing won’t reduce the amount of data, but a combination of those two features might be able to reduce the time needed to finish those backup jobs.

In short, these are the 3 core advantages:

In order to give you some insights on the direct improvement that multi-streaming can provide, we set up a test environment with following stats:

For the first test the backup job is setup as default and with only a single stream. The time needed was:

Enabling the software to split up the backup job into 8 streams decreases the time needed to:

The results of this test scale out quite well too. In a previous test with ~11 million files a single stream took a little over 24 hours, whereas with 8 streams it did that same backup in 4 hours.

To get a better idea about multistreaming and how NovaStor DataCenter solves that task, feel free to watch the webinar recording on YouTube.

If you haven’t already, sign up for our email to receive information about the technology behind NovaStor DataCenter, NovaStor’s technology partners, Webinar invitations, and general network backup and restore knowledge.

Categories:Pre-Sales QuestionsBackup VideosTechnology Updates / Releases
← 3 Critical Oversights with Network Backup and How to Avoid Them
How to prevent Backup and Restore Disasters →