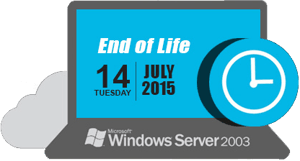 July 14th, 2015 will be the official end of life for Microsoft support of Windows Server 2003. All major and minor versions won’t get any further support from Microsoft, and no release patches, bug fixes or security updates are following. You probably have gotten hundreds of emails during the last months that explain how you could upgrade your current server to the newest windows server operating system. What a lot of those emails and papers do not help with is what if you are just not able to upgrade or migrate. You have a legacy business critical application running and that application will run on Windows Server 2003 only?

How to protect Windows Server 2003 after end of life?

Sooner or later it is important to move to a new platform. Don’t rush yourself into a new system without testing it thoroughly, otherwise you could end up with half of your application not working properly. While searching for a new alternative, your data still has to stay safe. A lot of backup software vendors will end their support for Windows Server 2003 with the end of life notification from Microsoft. Having unprotected files is a major issue that cannot be left unmentioned. So how can you protect your business critical data thoroughly without missing parts of your network?

NovaStor, as every other backup software vendor, can’t continue to develop new driver for Server 2003. We know you cannot flip a switch and move to a new platform so even though others might be leaving you high and dry with support we are giving you some more time to protect your entire network. With NovaStor’s DataCenter you are still able to:

With virtualizing your Windows Server 2003 system you are able to secure it a little more, restore it as an entire system, and also prepare it for a later migration process. Keep in mind that Server 2003 is normally a 32-Bit operating system and thus, needs some extra preparation. With virtualizing your current system you can easily test new configurations without destroying important setups. Here are some tools that help during the process:

No matter which Hypervisor you choose, NovaStor’s DataCenter is able to protect virtual machines running under Hyper-V or VMware.

But don’t wait too long

One thing you should keep in mind is that Windows Server 2003 most likely won’t meet the current industry-wide compliance standards anymore. That means, if you need to keep your environment for example PCI, or HIPAA compliant, you definitely should take a closer look into some of the migration paths to newer Windows Server versions. Because the civil penalties for violating the HIPAA act can be very costly.

If you have further questions on how NovaStor’s DataCenter can protect your Windows Server 2003, contact us directly at dcinfo@novastor.com.

If you haven’t already, signup to receive information about the technology behind NovaStor DataCenter, NovaStor’s technology partners, Webinar invitations, and general network backup and restore knowledge.