While cloud storage and SAN snapshots have their advantages in random and partial restores, tape backup solutions are faster, more efficient, and far more affordable, especially when it comes to long-term storage of cold data.

At NovaStor, we believe that data protection: shouldn’t have a size limitation, that the cost per gigabyte should be low, and that data should be stored in the most indestructible manner possible. This is why NovaStor maintains support for tape backup.

With multiple options to choose from for tape backup storage, our backup experts provide you with a free consultation to help you find the right solution for your IT infrastructure and business needs.

Tape backup is still relevant and should be supported

Backup on tape provides hidden advantages by offering an affordable, offline backup of data that is truly inaccessible to hacking and corruption. Keeping data impervious to modern threats like ransomware,  is only 100% guaranteed when exposed systems are disconnected. Tape backup drives offers a viable, offline source for data protection that is secure and suitable for long-term storage.

While many of NovaStor’s competitors no longer support backup on tape or never have, NovaStor has supported tape backup since its inception and continues to support this under-served market. Rather than make users choose between storage technologies, NovaStor supports a wide range of devices to help businesses build a tiered backup strategy, tailored to their unique needs, including:

If you have large amounts of data to store and want a fast, efficient, affordable storage method, our backup experts can help you explore the best tape backup software to use.

Efficient Use of Tape Libraries

Today's tape libraries achieve enormous writing speeds. They read or write at more than a hundred MB per second and several hundred GB per hour. If during the backup process only a single stream is writing to the tape drive, the backup cannot even begin to utilize the drives' full speed potential.

Using a tape drive in a tape library without being able to fully benefit from its capacity, simply does not justify the investment.

With multistreaming (also known as multi-threading) the backup takes place at the maximum speed of a tape drive as it allows the data to be transferred in multiple parallel streams rather than in one long data stream. To make the best use of the high write speeds of the devices, the backup data is sent to the device at a constant data rate. If the data rate should drop, the device may also reduce its read speed, thereby slowing down the backup.

There are a lot of highly circulated myths about tape backup systems. Download our whitepaper on data tape backup now and separate the fact from the fiction. 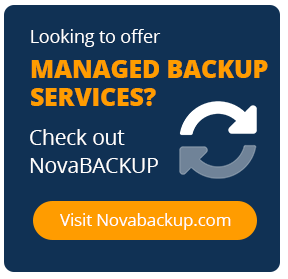 Talk to an Expert

Want a free consultation? Speak directly with a backup expert about backup on tape. Call 1-805-579-6700 or request a call back.

Is Tape Backup Dead? We Put the Rumors to Rest.

People have been proclaiming the death of magnetic tape for decades. There is a recurring tendency in some IT circles to declare backup to tape as obsolete or near death as ‘the cloud’ increasingly makes its way into the data centers of the world, as a backup destination. This whitepapers tackles some of the most popular myths about tape.

Our team of backup experts compiled a list of the top questions asked about our tape drive backup solutions.

Can I replicate my backup data to an alternate target like tape or the cloud?

Yes, with NovaStor DataCenter you can replicate data to an alternate location. A function of our backup retention is to use an alternate target for cloning (replicating) already backed up data to different media. This can be another disk, NAS, tape device or a cloud provider such as Amazon S3 for cloud tape backup.

Speak to an expert
Do you support LT08 single tape drives?

Speak to an expert
Do you support virtual tape libraries (VTL)?

Speak to an expert
How do I know what tape I need when I need to restore?

NovaStor DataCenter supports labeling of tapes if the tape device supports it.

Speak to an expert
Can I target a backup tape / tape library device located on my network without installing the backup software on it?

Speak to an expert
Can I run multiple backups to a tape at the same time?

Yes, you can run multiple backups to a tape at the same time using NovaStor DataCenter as it is able to run more than one job at a time.

Speak to an expert
Can I span backups over multiple tapes?

Speak to an expert
Do you support D2D2T?

Disk staging is a common practice for efficient storage usage. In D2D2T, the backup data is backed up directly to a disk for fast access. Once more recent data is available, the older backup data may be transferred to a tape library. Backup data on tape can be stored until a defined time period has expired and the data is overwritten by a new backup or the tapes are exchanged.

Speak to an expert

“NovaStor DataCenter is a light weight client which is necessary for our environment. It offers bare metal restore for disaster recovery. I am able to easily backup our operating system and I can also duplicate that data to offsite locations. Once offsite, I backup disk to disk then replicate it to tape.”

Consult with an Expert